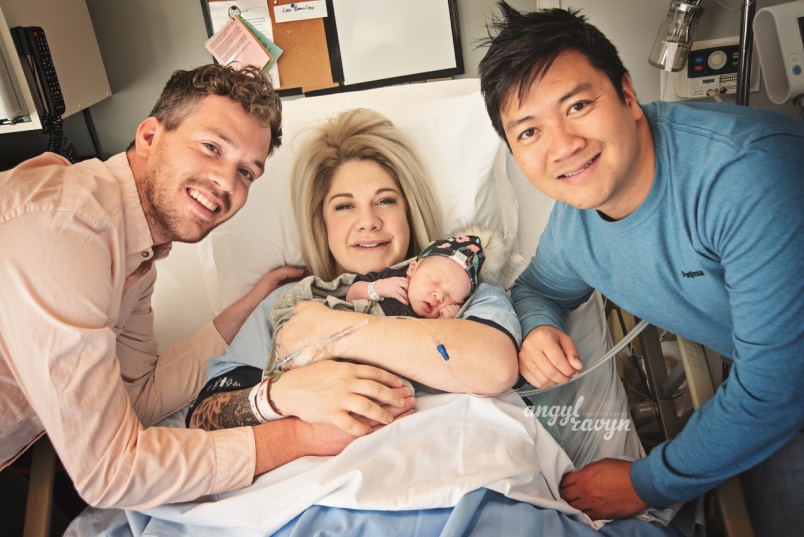 Tim Bangsund, Lisa Beaulieu and Chewn Bangsund gather for a photo with Florence Juniper Pham Bangsun. Florence was born on Nov. 6. Lisa served as the surrogate for the Bangsunds. Photo by Angyl Ravyn Photography

Lisa Beaulieu says that everyone does something big in their lives.

Some people get degrees or travel the world or build homes in other countries.

For her, it was being a surrogate mother.

Lisa, who is from Estevan, recently gave birth as a surrogate mother for former Estevan residents Tim Bangsund and his husband Chewn (nee Pham), who now reside in Adelaide, Australia. They have lived there for about seven years.

“I have always just thought it was a great idea,” Lisa said in an interview that the Mercury conducted with her and the two fathers. “To be able to have children is a gift, I think, and a lot of people don’t have the ability, so when I was younger, I always thought that if I was able to have children, that I would love to help another family.”

Florence Juniper Pham Bangsund was born on Nov. 6 at 10:54 a.m. at St. Joseph’s Hospital. The baby is doing great, and getting to know her fathers better.

The Bangsunds did not know Lisa well before embarking on the surrogacy process. Chewn and Lisa went to the Estevan Comprehensive School at the same time, and Beaulieu used to cut Chewn’s hair when they lived in Saskatoon. She doesn’t believe she had met Tim until just recently.

They connected when Lisa decided to embark on the surrogacy process, and one of their friends overheard and put the Bangsunds in contact with her.

“When I found out from a mutual friend they were looking, we hooked up online and the rest is history,” said Beaulieu.

Since talking for the first time, they have found they have a lot of the similar connections associated with being in a small city.

Lisa said she was going to be a surrogate regardless of if it was with them or someone else. She knew she wanted to do it after she went through a miscarriage the first time she was pregnant. If she had a healthy baby one day, her next pregnancy would be as a surrogate.

She and her husband Dylan had that healthy baby, Lyric, who is now eight years old.

Forty-two is the oldest that a surrogate can be; Lisa was 35 when she embarked on the surrogacy path more than 18 months ago.

“It can take a while, so I knew I might be 37 or 38 by the time it happens, so this was perfect timing. A lot of agencies recommend you don’t surrogate until you’re done with your own family, in case there’s any complications that could cause infertility.”

Lisa connected with Surrogacy in Canada Online, an agency that matches surrogates with potential partner families.

The Bangsunds had already registered with the agency.

A lengthy process saw Lisa and Dylan both go through medical screening and psychological screening, and then Lisa had to visit a maternal fetal specialist.

“The first one told me I was not a good candidate, so it took us a while, but we got a second opinion, and we got the green light, and in February I started fertility meds, hormone medication, and on March 5 we transferred one embryo,” said Lisa.

In the meantime, she continued to chat with the Bangsusnds through Facebook messenger.

The Bangsunds started looking into surrogacy about five years ago, because they always knew they wanted to be fathers. But they didn’t get serious about joining an agency until two or three years ago.

“We decided Canada versus Australia because it’s a lot more established and they’ve got agencies that help along the process. They help the surrogates and they help the parents just to navigate all of the legalities and whole process,” said Tim.

They had been looking for a surrogate before they came across Lisa.

“Surrogacy in Canada Online was a good service. I think we’ve been really fortunate because we have connections in Estevan, and by chance, one of my close friends who lives and works here in Estevan, her and Lisa talked about it, and a couple of days later, sent us a message.”

The Bangsunds’ surrogacy lawyer in Swift Current has been through the process previously with others, and she helped out a lot, too.

While Lisa said this will be the one chance she has to be a surrogate, the Bangsunds hope to go through the process again.

“I would love to have some siblings for Florence,” said Tim. “I grew up in a family of four, and so did Chewn. We’re all very close with our families, and it’s important to me that she has something of the same.”

And despite the hurdles that they have to clear, they said they would do it again.

“I love babies and I love being a mom, and I just feel very blessed to be able to give the gift of parenthood to another couple,” said Lisa.

“I actually wasn’t sure what kind of couple I was going to pick,” said Lisa. “I just felt like the right couple would reveal themselves to me as time went on, and they did. Very much so.” 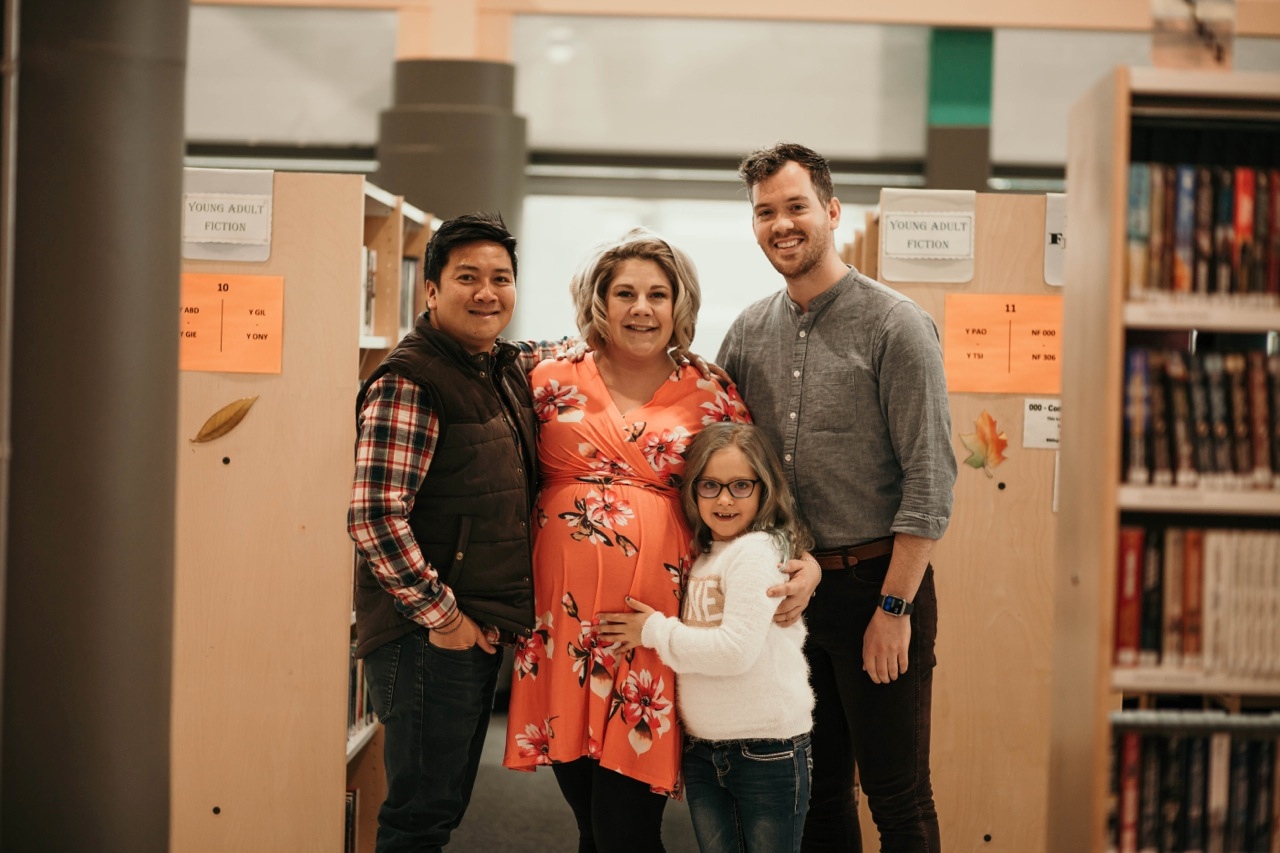 Chewn Bangsund, left, and Tim Bangsund with Lisa Beaulieu and her daughter Lyric before Florence was born. Photo by Lacie Paige Photography

Lisa expects she and Lyric will visit them in Australia, hopefully for Florence’s first birthday.

“We’ve also talked about, down the road, meeting up for vacations together as a big family. We’re going to be in contact forever, I’m sure,” said Lisa.

Lyric is crazy about Florence, too. She even refers to Florence as her baby sister.

Sally Rhoads-Heinrich from Surrogacy in Canada Online was a surrogate about 20 years ago who carried twins for a couple. It was such a wonderful experience that she started a surrogacy website to help connect surrogates and prospective parents, and to supply them with more information.

“It kind of grew into an introductory service to help intended parents and surrogates to connect,” said Rhoads-Heinrich.

She said the Bangsunds and Lisa were all wonderful to deal with during the process.

Surrogacy in Canada Online deals with about 75 to 100 cases a year. There has been a growing demand in Saskatchewan, from one every couple of years to three or four a year.

She noted that 50-100 women apply to be surrogates each month, but only five to 10 will be able to go through with it. Consequently, it means there are about 50 intended parents for every surrogate in Canada.

“We’re contacted all day long by potential intended parents that are struggling to find a surrogate,” said Rhoads-Heinrich. “It’s very hard to find a woman who is willing to help and carry a baby for someone else.”

Since Florence was born, the Bangsunds have been able to stay with his parents, who still live in Estevan, which has been a tremendous support while they learn to be parents themselves. Lisa has been able to visit with Florence every day.

Chewn pointed out that surrogacies are more common in Eastern Canada, and that’s where most of the mothers were from.

“To find Western Canadian surrogates is quite rare, and on top of that, to be in Estevan, where Tim’s sister lives here and Tim’s parents live here, it was pretty crazy, but pretty cool,” Chewn said.

They also praised the obstetrics unit at St. Joseph’s Hospital for being so accommodating.

“They went above and beyond and figured out how they could best suit the baby’s needs and everybody’s wishes,” said Lisa.

Tim and Chewn are looking forward to bringing Florence to Australia, where Tim works as a pharmacist at a hospital in Adelaide, while Chewn works for the BHP Biliton mining company. But they will likely remain in Saskatchewan until March.