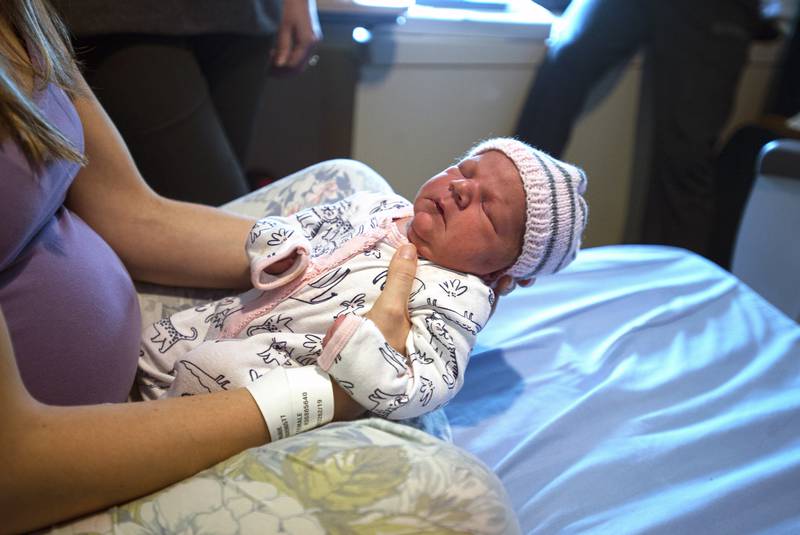 This is a birth story, but it’s also one of determination in the face of back-to-back heartbreaking failures. And it’s a story of a selfless gift from a Cole Harbour couple to complete strangers from Cincinnati, Ohio.

Happily dozing while cuddled in her mother’s arms, little Juliana Claire Krauth has no idea yet of the trials her parents went through to bring her into this world. But she’ll know soon enough she has a special kind of family in Nova Scotia.

A different kind of dream

Candace Benoit first wanted to be a surrogate when she was 19 years old. She worked with a woman who couldn’t get pregnant and offered to be her surrogate. The woman was honoured but told her she was too young. Candace did some research and decided she would be a surrogate after she had her own kids.

“I’ve always loved birth, pregnancies and newborns. I’ve always watched (the Canadian documentary television series) Birth Stories and all that, even when I was a teenager so it was always something that I knew I loved.”

The part she was most excited for, even at age 19, was the moment when she could give the baby to the family.

I figured if I couldn’t get pregnant like, oh my gosh I’d lose my mind, so I just can’t imagine how someone would feel. I was like, I have to do my part.”

Not long after Candace had her second son (now two years old), she noticed a Facebook post about surrogacy.

“It just rekindled that in me and I thought it was a good time, too: I haven’t lost all my baby weight and it was a good thing to do another pregnancy before I get not too old.”

She registered with a consulting firm called Surrogacy in Canada Online where she communicated with a few couples to see if they were a match.

“It’s a big thing: you’re going to be connected to them for sure over a year, and hopefully over a lifetime so you want to be able to talk to them and be comfortable with them.”

Nothing really clicked until she met an American couple who were almost at the end of their rope. 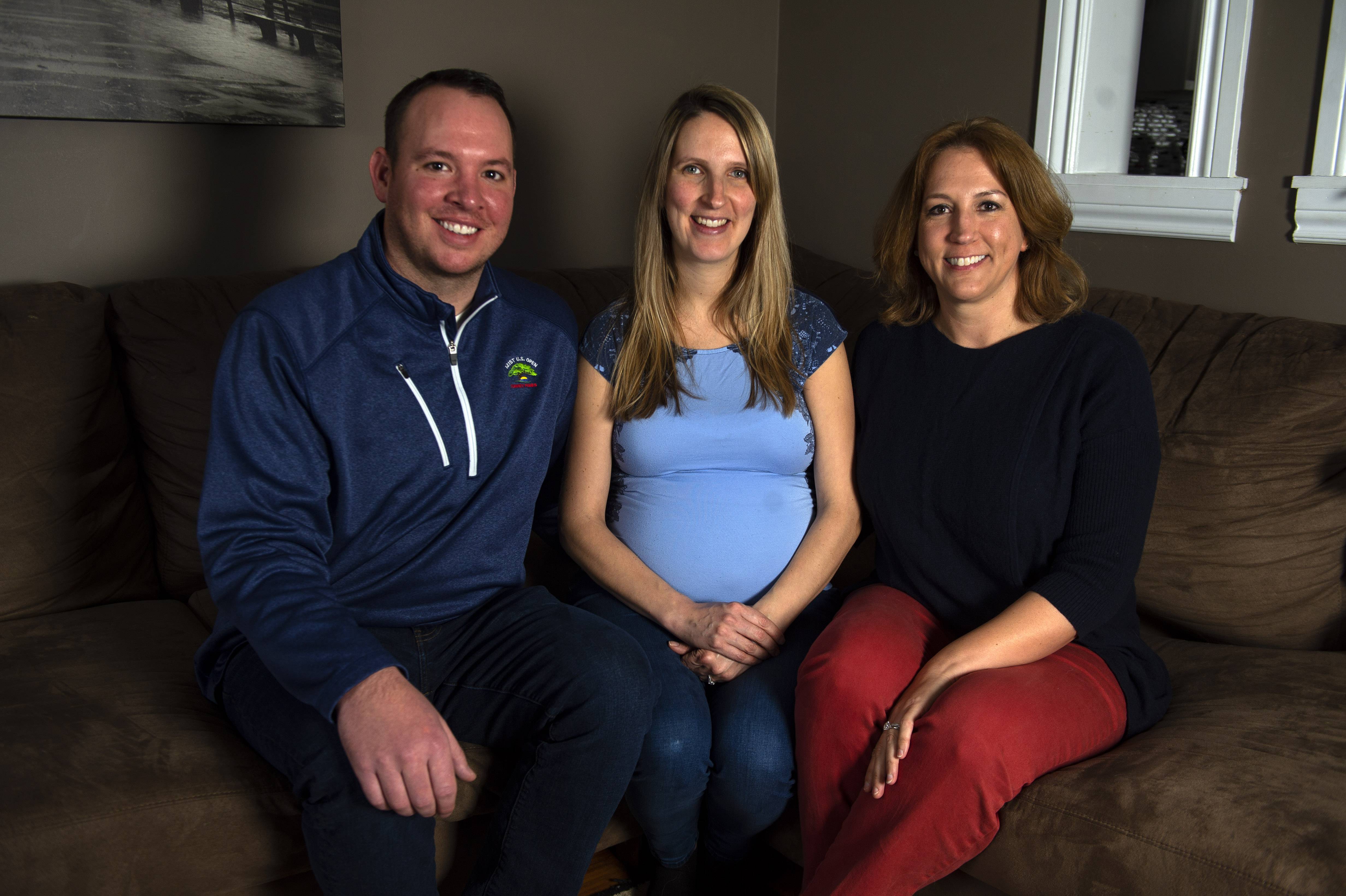 Candace Benoit, centre, poses for a photo in her Cole Harbour home with Josh and Jennifer Krauth on Wednesday, Jan. 15, 2020. Benoit volunteered as a surrogate for the couple from Cincinnati, Ohio. - Ryan Taplin

Jennifer and Josh Krauth sit on a sectional in Candace’s busy Cole Harbour home. Candace’s two dogs are making themselves comfortable and toys are stacked on one side of the room.

It’s a few days before their daughter will be born and Candace’s belly is beautifully round. Just a few minutes into telling their story Jennifer tears up. As they explain what they’ve been through to have their child, it’s no wonder their emotions are so close to the surface.

“We knew when we met each other I could no longer have children,” Jennifer starts. “We knew that in order -- I’m going to get choked up -- in order for him to have a child we're going to have to do this.”

Jennifer had three daughters when she was young -- they’re now 29, 26 and 24. Josh is eager to have a child of his own but since Jennifer is now 48, they knew they would need to look to in vitro fertilization (IVF).

So they started talking to a surrogate and created five embryos.

They remove a cell and do testing to see if it will be a viable embryo or not,” Jennifer says. “All of mine were abnormal, which is what we thought was going to happen, simply because of my age.”

They thought they were finished. But the doctor told them they’d already gone through the hardest part, which was finding a surrogate. The rest could easily be done with an egg donor. The couple thought it over for a few months and decided to take that leap.

The couple registered with Little Miracles, an egg donor clinic in Guelph, Ont. They decided to find an egg donor and surrogate in Canada because it's actually easier, explains Jennifer.

“That was one of the things that led us to be interested in going through this process in Canada, that there was so much less red tape than in the States. In the States (surrogacy is) very complicated, very cumbersome, incredibly expensive and not as common.”

After five false starts, they connected with an egg donor who wanted to remain anonymous but who was open to meeting the child after she turns 18.

“It’s a very weird process to look at a person on paper, and not judge,” says Jennifer. “There’s lots of information that is posted on these profiles and it’s very challenging to look at someone and look at just physical and behavioural characteristics and not be judgmental.” 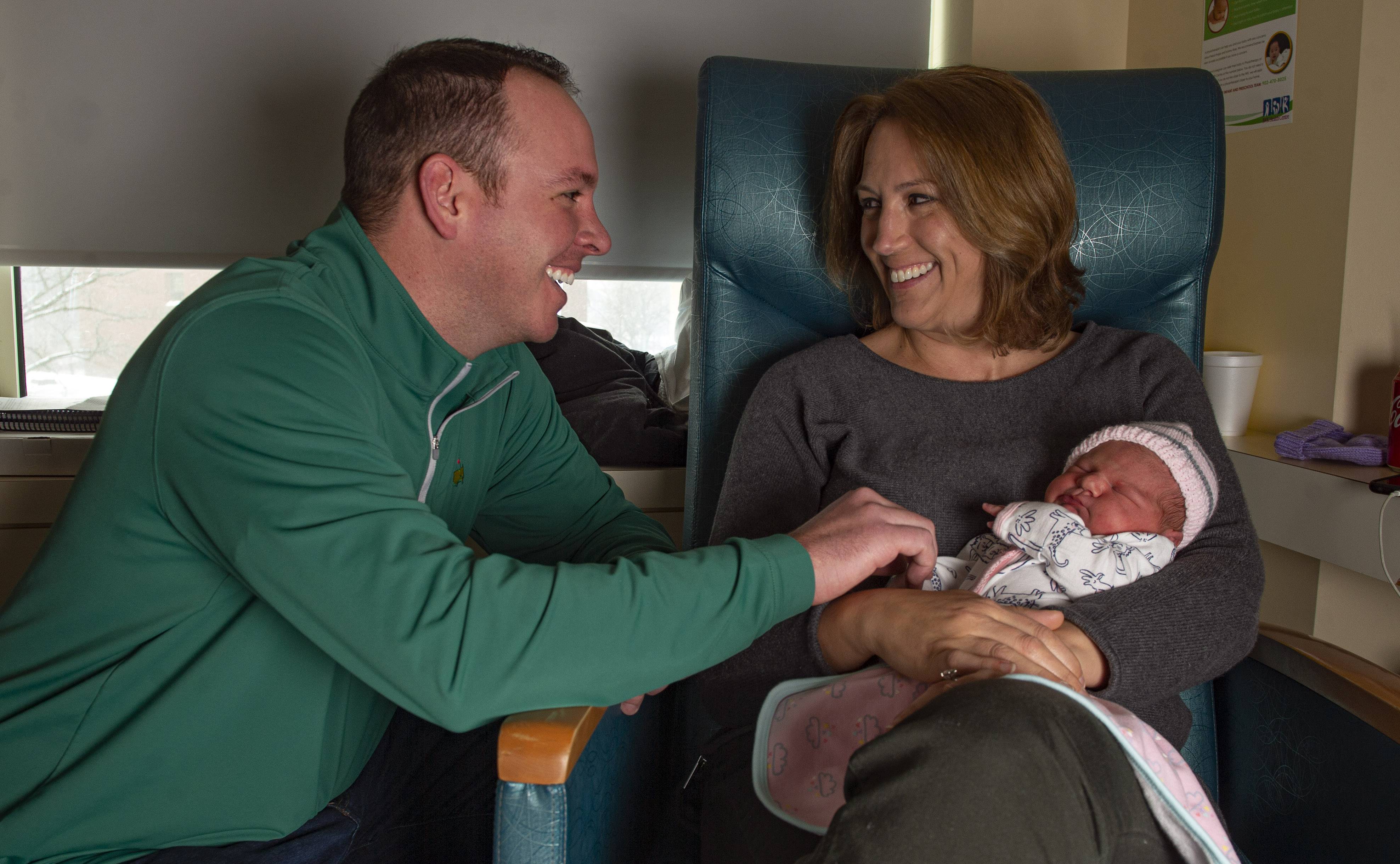 Candace Benoit, centre, poses for a photo in her Cole Harbour home with Josh and Jennifer Krauth on Wednesday, Jan. 15, 2020. Benoit volunteered as a surrogate for the couple from Cincinnati, Ohio. - Ryan Taplin

With an egg donor locked down, they needed a surrogate. In Canada, it’s illegal to pay a surrogate and only expenses are covered by the parents. Women who register to be a surrogate often back out.

“We matched with three other surrogates prior to Candace. The first one we were probably dealing with for about a year and her intentions were there, her follow through wasn’t,” Josh says.

“We would schedule appointments and she wouldn’t show up, something would happen. It just never really went anywhere so we finally, from a financial perspective we had to move on.”

The second surrogate match needed to lose over 50 pounds and after several months, the Krauths had to move on from her as well. The third woman just disappeared without an explanation.

“We were already so invested emotionally and financially -- you stop now why did you even get started?” says Josh.

For over four years they invested about US$125,000. Jennifer says they didn’t want to stop short just because of money.

“So why wouldn’t we put another couple of dollars towards this to just make sure it’s completely finished and that we’ve done everything we could possibly do?”

Given what they’ve gone through, it’s no wonder they came to expect the worst by the time they connected with Candace.

From the egg donor, they had two viable embryos for Candace to get pregnant. The Krauths weren’t even surprised when the first one didn’t take.

Down to the wire, they had one shot left at a baby.

“This was the end. One way or the other, it was over,” says Josh. 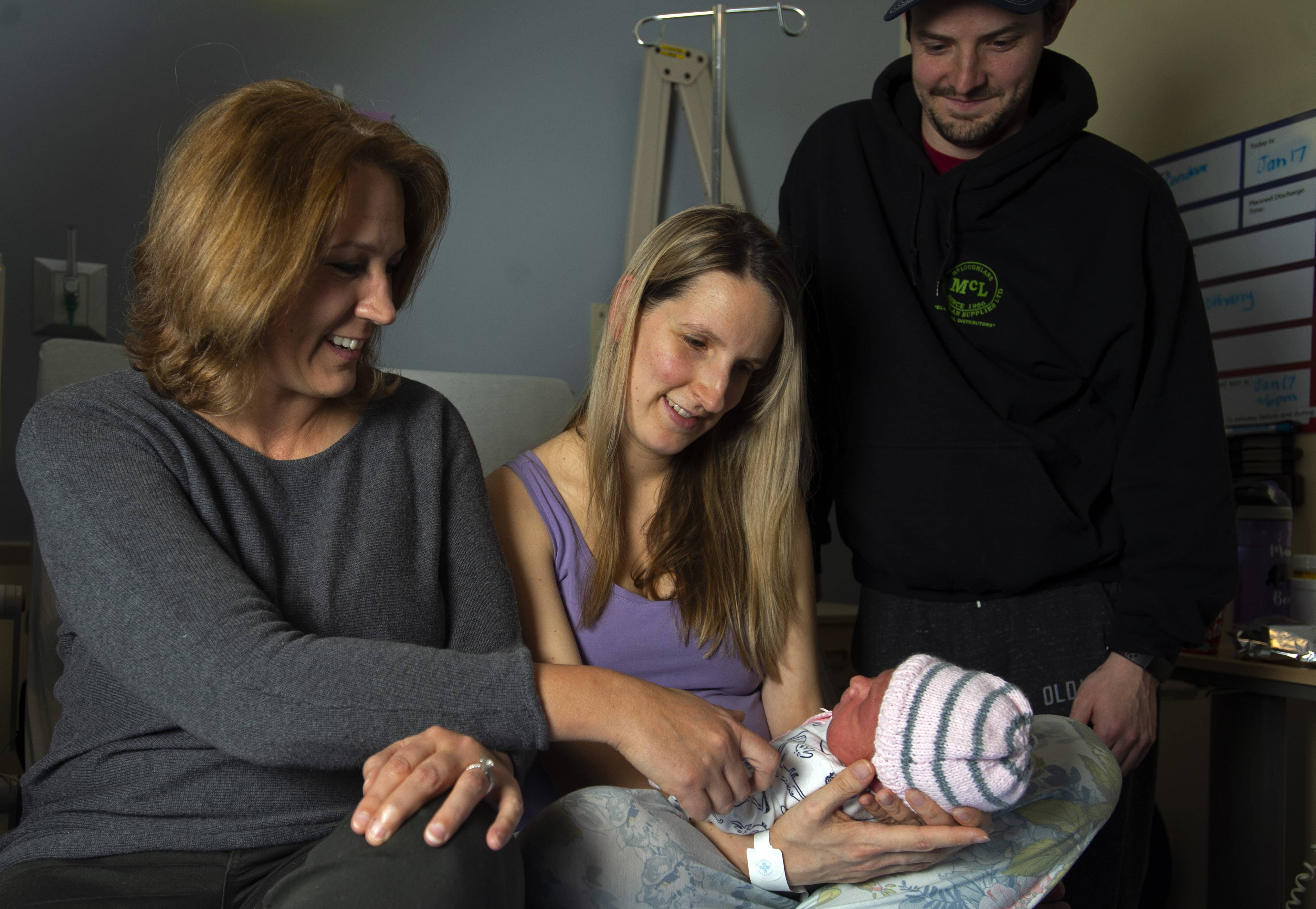 The adults crammed into a fifth-floor hospital room at the IWK Health Centre are like any other family gathered around a newborn. It’s Jan. 17, the day after Juliana Claire entered the world.

These two families, separated by distance but united with one goal, have become close.

Candace visited the Krauths in Ohio in October, attended a Celine Dion concert and a unique baby shower. Josh and Jennifer planned to visit Nova Scotia in the fall, but that very weekend post-tropical storm Dorian swept through.

Jennifer and Candace texted nearly every day to the point where if there wasn’t a message back and forth in a while, it would feel weird.

The Krauths will head home to Ohio once they have Juliana’s birth certificate and passport sorted out (she’ll have dual citizenship) over the next month or so, but it won’t end there. They’re going to send photos to Candace and her fiance Chris Kealy, and they’ve already been invited south for Juliana’s first birthday. The Krauths have been invited to Candace and Chris’s wedding.

Celebrating Juliana’s arrival and a fairly quick and easy delivery, the two couples pose for pictures around the hospital bed. There is much laughter, especially when the men realize they’re not standing next to their partners and make a quick switch.

Before, during and after the pregnancy Chris was there to help Candace every step of the way, whether it was administering meds or watching their kids while she jetted off to Toronto for an appointment. They put off planning their wedding until after the delivery.

“It’s an experience that is just breathtaking,” says Chris, sitting in the window sill of the hospital room and thinking back over the delivery the day before. “You’re giving a family, a family … just watching the joy, the love and the excitement, I don’t have the words to explain it.” 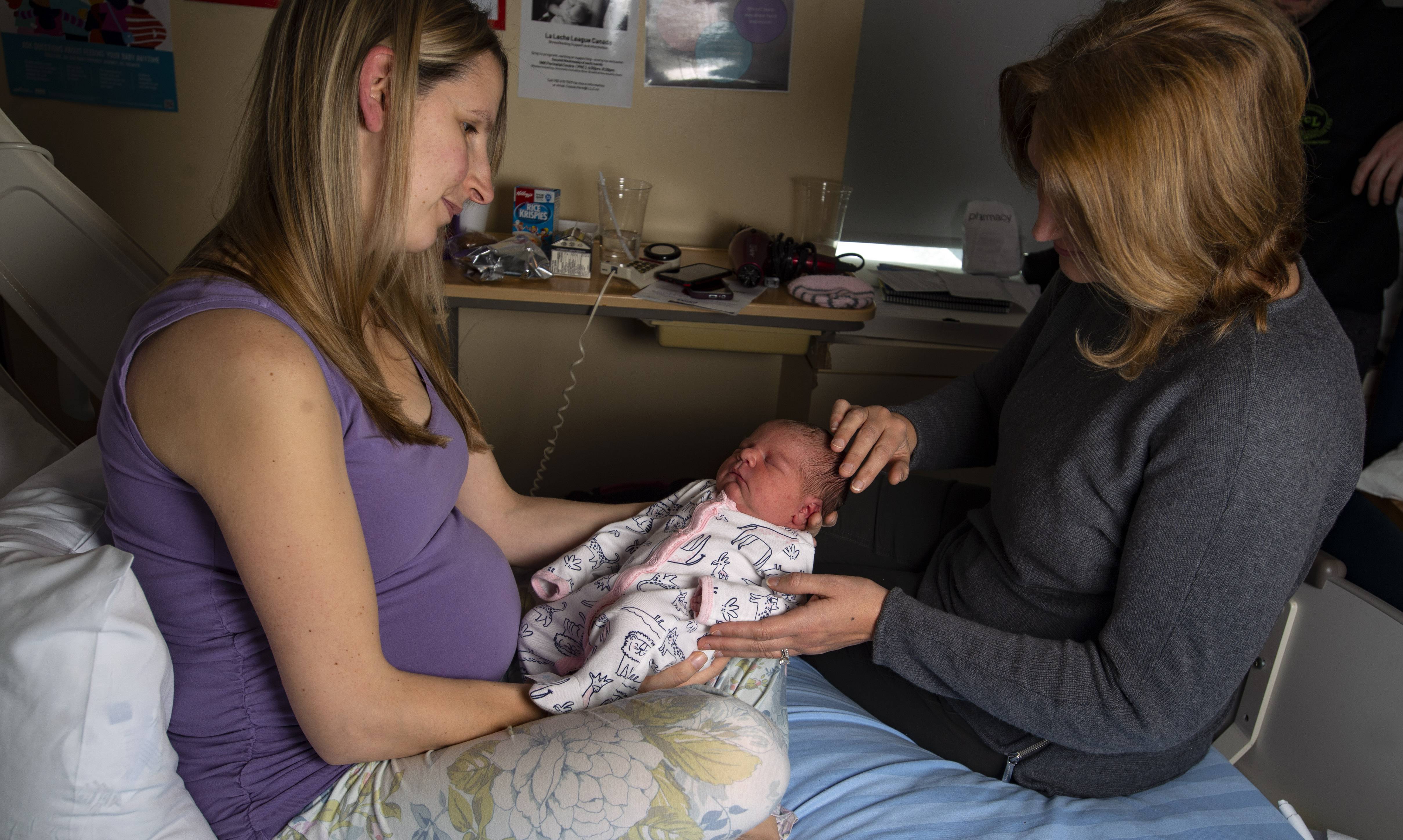 For the Krauths, usually, the first question they get from people is: “aren’t you afraid the surrogate is going to keep the baby?”

That has never been a concern.

“The reason she’s doing this is to give us the baby!” Josh explains with a laugh.

People feel comfortable asking intrusive questions, so much so, the Krauths stopped telling people about the surrogacy.

For Candace, one of the first questions she gets is how much she’s getting paid.

She responds: “For me, it’s out of the goodness of my heart.”

People can hardly believe it.