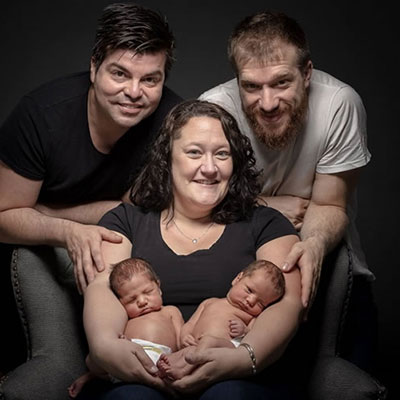 I had always dreamed of being a surrogate, ever since I’d had my daughter 14 years earlier. I signed up with SCO, and the emails started coming in. My husband and I read through so many touching emails, but we found one couple that we knew would be a perfect fit for us. The first conversation, and I knew we were right. We talked for many hours, and without hesitation, I asked them if they’d let me be their surrogate! It was a match made in heaven. F+A weren’t very far into the process yet. They had an egg donor but no embryos yet, so I helped them find a clinic closer to the egg donor and myself (since were both from Alberta) and we scheduled a meet up in Vancouver over the Thanksgiving weekend.

The in person meet was as perfect as all of our conversations leading up to it had been. We went through the screening at the clinic both physical and psychological, and we all passed with flying colours. We had everything eventually transferred to the Edmonton branch of the fertility clinic to save the IPs money, and the egg donor and myself time. It felt like forever until we were doing the transfer, but that gave us all time to make sure everything was perfectly in place and that we remained a great match. The contracts were easy, we had discussed everything beforehand so it made that portion a breeze.

Then it was here, transfer day. We Skyped in F+A and the first two embies were safely on board. So much anticipation. We waited a few days, and against all recommendations we couldn’t help but peeing on sticks, it’s a surrogate's biggest addiction I’d heard... and boy were they right. When you get that first positive, you can’t help but watch it grow! We were pregnant and I was so excited for the daddies, but it didn’t last long. I’d had a chemical pregnancy and as quickly as the positive was here, it was gone. It was heartbreaking. We took a couple days and decided we’d try again. We waited on my cycle, I started the medication routine again, and we went for round two. It was unsuccessful.

F+A talked to the egg donor again, and we went for another round. We implanted two more embies and lo and behold, I was pregnant! We confirmed pregnancy, and then waited patiently for the first ultrasound. Twins!! It wasn’t long after that my morning sickness made it almost impossible to function, but these two little miracles kept growing so well. They were big. Every ultrasound confirmed that I was very much growing two separate babies that were single baby sizes!

F+A came and stayed with us for two weeks at the mid point of pregnancy, we got to show them around where we live, and we rekindled our friendship over again, very much enjoying this new extended family. They went home to Sweden and the final countdown began.

They aimed to be back in Canada for 34 weeks gestation, and they landed not a moment too soon. About 4 days after they got here, I was admitted for mild pre-e. I stayed in the hospital for a week and my OBGYN and I made the decision to induce.

My induction was a breeze. I had an OB that supported me trying to give birth to twins naturally, so we went for it. At 930pm we started the drip, breaking my water, nothing seemed to start me going... mild labour until about 630am. The dr checked me, I was still only 3cm, so they told me I could use the washroom... the walk must have got everything going, because when I sat to pee, I blacked out. When I woke up, there was a baby’s head there! The nurses all went crazy, and F+A, my husband, and our doula were in a frenzy of excitement... I gave birth to baby A on the hospital bathroom floor! I was escorted back to the bed, and made quick work of baby B too. 7:02pm 6lb 14oz and 7:18pm 6lb 2oz. The expression of love on these dads faces, it was the most perfect feeling in the world. I did it. I’d given birth to twins naturally, with no tearing. Talk about baby making power right there. Our best friends were dads. They were taken to the nicu where they were monitored for a week because they were still early (but later than a lot of twins). My IPs were staying with my husband and I, so we did everything we could to help them out, I couldn’t imagine being so far from all your support with two new babies! We all felt so blessed, my husband couldn’t believe the raw power of me in labour, as we don’t have children of our own together.

The post baby legal stuff was fairly easy. They needed DNA tests, and of course to have me removed as the “mother”. The whole process from birth to them flying home to Sweden took about 6 weeks, but we were so grateful to have them there with us through the whole thing.

The twins are now back home in Sweden, I still have two of the best friends I could ever imagine, and now being Auntie Lauren, is the greatest gift *I* could have received. Surrogacy changed my life, my world, and expanded my heart in ways I couldn’t imagine.