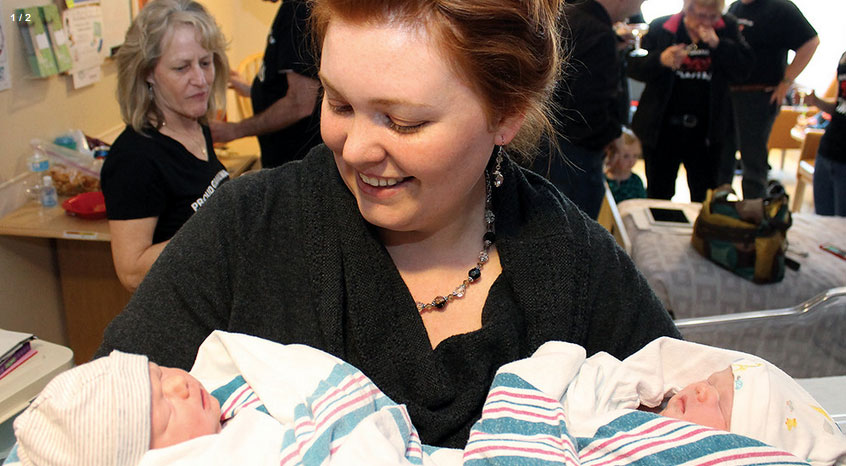 BY SHAWN LOUGHLIN - The Citizen

Working out of her home at RR1, Londesborough, Sally Rhoads-Heinrich and her company Surrogacy in Canada Online have helped hundreds of families to grow since 2001.

Rhoads-Heinrich was one of the first to the table in Canada as far as connecting would-be parents with potential surrogates over the internet. She created the resource website in 2001, in the early days of the internet, and the service has only expanded in recent years.

The website has since evolved to match over 100 potential parents and surrogates every year, operating on the model of a dating site. So far in 2018, 30 babies have already been born with another 40 on the way.

Rhoads-Heinrich lives in the Londesborough area with her husband and children, where they also have a cash crop farm with corn, soybeans, wheat and specialty beans.

When she was just 21, Rhoads-Heinrich opted to venture into the world of surrogacy herself after having her first child.

During this time, Rhoads-Heinrich found herself on a number of internet forums and she saw a large number of prospective parents frustrated with a number roadblocks on the way to starting a family. Whether it was infertility or challenging adoption experiences, would-be parents were having trouble starting a family, she said, and she wanted to help.

After her first pregnancy, Rhoads-Heinrich said she was happy to sacrifice nine months of her life to help another family. The pregnancy was very easy, she said, and she wanted to help others find the life-changing love she found with her first child.

She decided to put her name out as a surrogate mother and was contacted by hundreds of potential parent matches. Rhoads-Heinrich said she wanted to find the perfect match and she did so with a couple from Maryland who had experienced tremendous loss as the result of a motor vehicle collision.

The mother was nine months pregnant with twins at the time of the collision. She lost her children and had to have a hysterectomy, rendering her infertile.

They had a low chance at surrogacy, Rhoads-Heinrich said, with only four of the woman’s embryos in storage, but Rhoads-Heinrich became pregnant with twins when the embryos were created and transferred to her body.

Delivering those twins in December, 2000 in Stratford, Rhoads-Heinrich says, was a pivotal moment in her life.

She became close with the family in the months leading up to the birth and was so happy for them.

She created a blog around that time to keep the family, as well as others updated on the process, which turned out to be the precursor to her current website.

After her first experience as a surrogate, Rhoads-Heinrich was inundated with correspondence from both sides of the pregnancy. Not only was she hearing from would-be parents looking for surrogates, but she was also hearing from women who wanted to become surrogates.

She developed a resource website that served to answer questions about surrogacy and lead people to get involved.

After her first surrogacy experience, Rhoads-Heinrich would spend the next eight years unsuccessfully attempting to be a surrogate mother once again. In 2005, she almost died from an ectopic pregnancy which ruptured one of her Fallopian tubes. She retired from being a surrogate mother in 2008.

The website, Surrogacy in Canada Online at surrogacy.ca, eventually evolved, however, to what Rhoads-Heinrich has described as following the dating site model. It provides a place for would-be parents and surrogates to list their profiles and potentially find matches that can sometimes result in the growth of a family.

Once a couple is matched with a surrogate – the matching is up to the couple and the surrogate, Rhoads-Heinrich says, she isn’t legally allowed to match-make as part of the process – Rhoads-Heinrich then provides any advice or resource that is needed.

Once a match is made, Rhoads-Heinrich helps to file the necessary paperwork and get the process rolling.

She says the most rewarding thing for her has been seeing hundreds of children born thanks to people finding one another on the website. All of those children coming into the world, she said, is the best reward there is.

What has been challenging, however, has been managing expectations and demand, Rhoads-Heinrich says.

Surrogacy has seen a boom in the last three years, she says, and there are always more potential parents than there are surrogates (would-be parents outnumber surrogates approximately 10-1 on the website), so it makes it difficult when not everyone can find what they’re looking for through the service.

Rhoads-Heinrich says that some surrogates are very selective regarding parents they want to match with, which sometimes leaves others matchless. That decision, Rhoads-Heinrich says, is up to the surrogates, so while she feels for parents who have a hard time finding a match, she can’t do much to help in that scenario.

While the company has worked with parents all over the world – from countries like Israel, Germany, England, Australia and the United States – many of the families Rhoads-Heinrich helps are from Huron County, which has been very rewarding to have that kind of impact in her home community.

She said that while some of the people closest to her had a hard time understanding her call to surrogacy when she was in her early 20s, many have come around in the years since.

Another of her biggest challenges, she said, has been a lack of knowledge around what surrogacy actually is and the service it provides to parents who, for one reason or another, have not been able to or have chosen not to conceive on their own.

In addition to providing a way for surrogates and prospective parents to connect, her website is full of resources and information on surrogacy, all run out of her home just five minutes from Blyth.

For more information, visit the company’s website at surrogacy.ca.