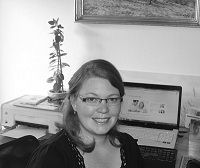 Helping infertile couples have a family...

The Huron Expositor By Susan Hundertmark

Raised in a large family with close ties, Sally Rhoads-Heinrich was a first-time mother for only three months when she started to worry about the heartache suffered by infertile couples.

"Pregnancy was very easy for me and I just couldn't imagine not being able to have a child. I read stories about infertile couples and my heart went out to them and when I learned about surrogacy, I was so excited to help. What's nine months when you can give someone a family," she says, adding she posted an ad on the Internet and had 200 responses in the next six months.

She became a surrogate mother of twins for an American couple from Maryland in 2000 and spent the next eight years going through unsuccessful attempts at surrogacy, once almost dying in 2005 from an ectopic pregnancy, which ruptured one of her fallopian tubes.

And, while she retired from being a surrogate mother in 2008, the Kinburn-area woman, who is expecting a fourth child of her own in September, now runs a business and website called Surrogacy in Canada Online that provides information, referral and support to both infertile couples and women who are interested in becoming surrogate moms.

"It's kind of a niche market – there are very few people needing those services but it's very busy," she says.

Rhoads-Heinrich receives two or three calls every day from infertile couples both in Canada and around the globe, including France, Germany, Switzerland, Italy and China.

"Surrogacy is becoming way more common," she says, adding that there is still much controversy and misinformation about the issue.

"Some people are convinced you're giving away your own child. Even my own parents were a little confused at first," she says.

"There were 36 embryos put into me but only two of them made babies," she says, adding that she kept agreeing to try again because she kept hearing heartbreaking stories from couples. Some had endured many unsuccessful IVF (in vitro fertilization) attempts, one woman had been born without a uterus and one woman would develop dangerously high blood pressure, having a heart attack during her third pregnancy attempt.

"There were always these horrible stories so it was too hard to say no," she says. "There are so many stories of people who would do anything for a child – they're just so desperate."

Rhoads-Heinrich says that while surrogacy can end up costing about $60,000 Canadian, it is often cheaper than international adoption and faster than adoption in Canada, which often means a 10-year wait. The $60,000 includes the costs for legal fees, the IVF procedures and paying the costs of the surrogate.

Her services include a $250 Surrogacy in Canada handbook and $2,200 surrogacy referral and support services for intended parents. She also accepts applications from women interested in becoming surrogates or egg donors. Helping to match intended parents to a surrogate has no charge.

While her website and the information she provides was a free service for eight years, Rhoads-Heinrich says she needed to turn it into a business to fund the costs of offering a website. She says there are three other businesses in Canada that do what she does.

She says she receives about 10 applications from surrogate mothers each month but can usually only approve about half of that number after they fill out a rigorous 10-page application form. Surrogates need to be between the ages of 21 and 40, have had at least one child and have no history of premature birth or serious pregnancy/delivery/post partum complications. Among a long list of requirements, they must be in excellent physical and mental health, in a stable relationship and have a good support system.

Because surrogates end up taking part in an IVF process, Rhoads-Heinrich says they have to be willing to take hormone injections and have invasive procedures, travel to fertility clinics, lawyers' and doctors' appointments and take time away from their jobs and families.

"Quite a few surrogates have lost their uteruses and couldn't have children themselves so it's a good idea not to become a surrogate until you've had your own family. Some of them have to go on bed rest and have lost their jobs. There can be a real financial loss to her family," she says.

Surrogates often have a tougher time with an IVF pregnancy and while couples turn to surrogacy because they have had miscarriage after miscarriage, even the surrogate pregnancies can end in miscarriage.

"Often a surrogate gives the couple the final answer that their embryos won't work out," she says, adding that some couples go bankrupt in their quest for a child.

Asked why a woman might make such a sacrifice for an infertile couple, Rhoads-Heinrich says the success stories make surrogacy worthwhile.

"A lot of women feel so blessed with their own children they want to give back. They usually come across surrogacy in a magazine or online and think that it's something fulfilling they can do in their lives. There are a lot of good people in the world," she says.

"A lot of women want to do it but their husband or family won't support them. Yes, there are risks but we don't do that to people who are in the army. There is something to be said for supporting other people's dreams," she says, explaining that most people don't withdraw their support for other risky endeavours like serving your country with the armed forces.

As well, Rhoads-Heinrich says the majority of surrogate moms have a good relationship with the infertile couple and share the total pregnancy experience together.

"Most are there from the moment of conception and are doing middle-of-the-night ice cream runs for the surrogate mom. And, a lot of couples make the surrogate mom the godmother of their child and exchange pictures and emails once a year," she says.

Rhoads-Heinrich says the twins she gave birth to as a surrogate mom are now 10 years old.

"I met them when they were eight and I didn't feel any sense of longing. It was so neat to see them. I still thought of them as babies – I'll always see them that way. They don't look anything like my kids; they're not mine," she says.

She says her own children understand that her surrogacy experience as "no big deal."

"My son talks about the babies I carried in my tummy because the mother's tummy was broken. Children by nature are very sharing and giving," she says.

While the issue of surrogacy often raises the question of whether the surrogate will be able to give up the child after the birth, Rhoads-Heinrich says there has never been a case where that has happened in Canada. But, four surrogates in Canada have ended up raising the baby they carried because the couples changed their minds.

"We have never had a woman change her mind. We do a lot of screening and we don't accept anyone who's had severe post partum depression. Almost all the couples who changed their minds got divorces and didn't want the baby anymore," she says.

While there are still ethical debates about whether or not surrogacy is turning children into commodities to be bought and sold, Rhoads-Heinrich says the children born through surrogacy turn out "very happy and well-adjusted."

"When you find out how many people have come together to make sure you were born, how could you not feel wanted?" she says.