Everyone's eyes were on the cart as it was pushed into the hospital room.

The two tightly-wrapped babies gurgled slightly as everyone oohhed and aahhed. The word "miracle" escaped the mother's mouth as she gazed fondly at the boy and girl twins she did not give birth to.

The twins, Victoria Elizabeth and Peter Alexander, are a "gift" from gestational surrogate mother Sally Rhoads of Stratford to Heather and Sergey, a couple from Maryland, who can't conceive.

"Surrogacy was the only chance to be parents and have a baby of our own," said Heather. She and her husband asked not to have their last name disclosed, in order to protect their privacy.

Victoria Elizabeth was born at 3:50 a.m. weighing 3.37 kilograms and Peter Alexander was born at 3:52 a.m. at 3.34 kilograms at Stratford General Hospital Saturday. They are in perfect health, said Heather. She and her husband are staying in a courtesy room at the hospital until the babies are released.

The couple, who are both twins themselves, lost all hope of having children when Heather, who was eight months pregnant with twins, was involved in a car accident. She lost the babies and her uterus was removed to prevent further hemorrhaging, leaving her unable to conceive.

"I was completely devastated," she said. "I just wanted to die."

But things got better for the couple when Heather found out her ovaries were intact and she was able to produce eggs. Hearing about surrogacy from a friend, she browsed the Internet searching for information.

Mrs. Rhoads, 22, and her husband, decided to embark on the controversial path of surrogacy after the birth of their son Tristan, who turns two in January. Wanting to share the joy of having a child with couples who can't conceive, they placed an advertisement on the Internet offering Mrs. Rhoads as a surrogate mother.

"That's how I found Sally," said Heather of her Internet search.

After removing the eggs, inseminating them and planting them in Mrs. Rhoads' body, all Heather and Sergey could do was wait.

When Mrs. Rhoads, 37 weeks into the pregnancy, came to the hospital for a routine check up Friday, her doctor found she was dilated by six centimetres. Both babies were facing the wrong way, heads up and legs down, and Victoria Elizabeth's umbilical cord hung down, posing a hazard to her survival. The doctor proceeded with a caesarean birth.

Concerned about the safety of Mrs. Rhoads and the children, Sergey and Heather drove 11 hours from Maryland, just missing the delivery, but arriving shortly after.

"I felt like the floor was moving," Heather said describing her initial reaction to seeing her children. "It is one of the most overwhelming feelings." 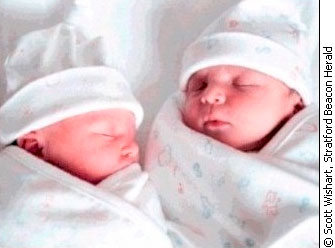 Speechless, Sergey said he stood in the hospital room in awe.

Bonding with the children is not a problem for Heather, who said "even before they were babies I was already loving them."

Letting go of the twins who inhabited her body is something Mrs. Rhoads is prepared for. Mr. Rhoads is taking two weeks off of his job at Q Lube in Stratford to help his wife cope with any emotional turmoil. Although the pregnancy was painful, unlike the birth of her son, Mrs. Rhoads said she is willing to be a surrogate mother to another couple in the future. Giving Tristan a sibling is also on the agenda, said Mr. Rhoads.

Beaming with pride, the twins' parents will remain in Canada for another week before returning with their babies to the United States. Legal matters, such as proving custody with DNA samples and changing the babies' surnames to their own, will be completed within the next two months.

Sleeping soundly, the tiny babies barely noticed the attention lavished on them, but the smiles on the faces of their parents and the happiness of the Rhoads bore witness to the miracle that had occurred.